Let’s face it – who would allow the government (or anyone else) to implant a traceable microchip under their skin to monitor their every move especially when there is a chance of it being “The Mark of the Beast” prophesied in Revelation of the end times. No one wants to be implanted like an animal and numbered like cattle, but how many of us have become used to the idea of the RFID Chip being in our Credit Cards? Look at how easy it will be to convince people to take the next step . . . No RFID chip – No travel – No Food – No House – etc. . .

Revelation 14:9-11: If any person worships the beast [Antichrist] and his image, and receives his mark in their forehead, or in their hand… they shall be tormented with fire and brimstone…  And the smoke of their torment will ascend up forever and ever: and they will have no rest day or night, those who worship the beast and his image, and whosoever receives the mark of his name.

Micah offers good advice.
Micah 7:5-7: Do not trust in a friend; do not put your confidence in a guide (leader). Guard the doors of your mouth from her that lies in your bosom. For the son dishonors the father, the daughter rises against her mother, the daughter-in-law against her mother-in-law; a man’s enemies are the men of his own house. Therefore I will look to the Lord; I will wait for the God of my salvation; my God will hear me.

Revelation 13:16-18: He [the Antichrist] forced everyone, both small and great, rich and poor, free and slave, to receive a mark in their right hand, or in their foreheads:  And no man can buy or sell, unless he had the mark, or the name of the beast, or the number of his name.  Here is wisdom. Let him who has understanding count (calculate) the number of the beast: for it is the number of a man; and his number is 666.

Notice that the Mark is placed IN their hand or forehead. It is not a Mark that is placed ON their skin - according to the Greek New Testament - therefore it is almost certainly a microchip implant. 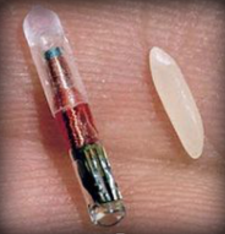 Revelation 19:20: And the beast [Antichrist] was taken, and with him the false prophet that performed miracles before him, which helped him to deceive the people who had received the mark of the beast, and those who worshipped his image.  They were both cast alive into a lake of fire burning with brimstone. 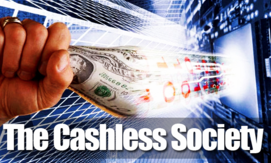 Microchips in Humans have Become Reality

Could they be the Mark of the Beast?

The most sophisticated chips are now the size of a small grain of rice. Yet, they are more sophisticated than anyone can believe. In design, the chip is simple: Cheap implantable devices and quick, low-cost implantation have made chipping easy and affordable. It takes about 20 minutes, and does not require stitches. A medical-grade glass capsule holds a silicon computer chip, a copper antenna and a “capacitor” that transmits data stored on the chip when prompted by an electromagnetic reader. Implantations are quick, relatively simple procedures.  After a local anesthetic is administered, a hypodermic needle injects the chip under the skin. Then a chipped person’s medical profile can be continuously updated, since the information is stored on a database accessed via the Internet. Chip tracking and scanning is reliable, thanks to wireless, GPS, and RFID scanning networks.

This Bio-Microchip is a computer microchip that is both a transponder and a receiver. In other words, this microchip constantly sends out a signal that can be picked up by tracking stations, and it can be changed millions of times with technology similar to that of UPC Code technology, thus allowing it to be used for financial and personal transactions throughout the lifetime of the individual. This microchip will send out a signal constantly throughout every day that will uniquely identify that person and his/her whereabouts. There will be no way a person can hide from authorities once this new microchip is installed. However, to be able to send out this constant signal, this microchip must be powered by a most unique battery — one that is constantly recharged by the human body.

This highly advanced battery is constantly being recharged by the heat fluctuations that the human body emits throughout every day. Therefore, as long as the person lives, the battery is constantly charged. As researchers were developing this battery, they were wrestling with the question as to which parts of the body would be most ideal in planting this Bio-Microchip. Which parts of the body would be most efficient in keeping the battery the most ideally charged? Researchers spent $1.5 million to discover the answer to this most important practical question. After all, one could not have hundreds of thousands of personal microchips running out of power. After much research, scientists concluded that there were two equally ideal parts of the body which would keep this biology powered battery fully charged.

And which parts of the body did they name? Students of Biblical prophecy could have saved these scientific researchers a lot of money. We simply could have referred them to Revelation 13:16-17, where our Lord Jesus Christ revealed to the Apostle John that the right hand and the forehead would be the places where the mark would be implanted. Yes, these scientific researchers discovered that the human body had two parts which were equally efficient in keeping this biological battery powered — the right hand and the forehead. They even discovered that the left hand is not as efficient as the right hand in keeping this battery powered, because heat fluctuations are greater in the right hand for reasons they do not fully understand. Doesn’t it build your faith when you see instances such as these where God has acted to ensure that even the smallest detail of His prophecies are fulfilled!

This wonderful instance of small details being important to God brings to mind His bold proclamation in Isaiah 34:16, where God says, “Seek you out of the book of the LORD, and read: not one of these (details of prophecy) shall fail.” As we said before, this Bio-Microchip will constantly be sending out a very low frequency signal identifying each individual on earth. These signals will be picked up by a combination of earth based antennas, such as the antennas now being feverishly constructed for the cellular phone network, and by stationary satellites in low-level orbit.

The tiny microchips can contain 34 billion unique sets of individual identification codes, thus easily providing the capability to assign a unique code to every human on the planet today. Plans call for this implantable microchip to be utilized instead of passports and driver’s licenses. People can be identified for every government program in existence by scanning this microchip. These microchips have been implanted in animals, through the veterinarian channels, for almost two decades now, so that the problems with this technology have been identified and solved.

The Implantable Microchip – Can It Be Removed?

VeriChip CEO Scott Silverman has told the press that removing a VeriChip implant is a simple, almost trivial procedure. In a 2006 interview he said: “Should a person request the removal of an implanted microchip it can be removed by a simple out-patient procedure. It could be equated to removing a large splinter or a piece of glass.”

Those who have actually undergone the chip removal procedure say that removing an implanted VeriChip device requires painstaking surgery that has been described by patients as sometimes difficult, and expensive. The chip cannot simply be slid out of the body like a piece of glass, but rather a plastic surgeon must cut away the scar tissue that forms around the chip.

The implantable microchip can be removed from the body – but it’s not like removing a splinter. This image is from a French documentary showing a VeriChip being surgically removed from the arm of a journalist.

Many people in the world think the microchip will solve a lot of the world’s problems. Some are already saying, the sooner the better, maybe then we can get a handle on the criminals, perverts, and undesirables in America. They think the microchip will prove invaluable with a person’s entire medical history, and identification stored on it. It will help protect the children and the elderly, and they may ultimately start implanting the chip in children at birth. It will solve identity theft and stealing problems. You will never have to carry around cash, debit cards, credit cards, or medical information.  It will stop terrorism, as each mark will be able to be traced through GPS. The microchip is also a high-tech helper that could increase security at nuclear plants and military bases, and allow consumers to buy their groceries, literally, with the wave of a chipped hand. We are on the verge of creating a surveillance society in America, where every movement and every action will be tracked, monitored, recorded and correlated. 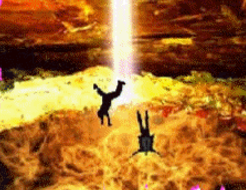 Revelation 13:4: And they worshipped the beast (the Antichrist), saying, Who is like unto the beast?  Who is able to make war with him?

Revelation 14:9-11: If any person worships the beast [Antichrist] and his image, and receives his mark in their forehead, or in their hand… they shall be tormented with fire and brimstone…  And the smoke of their torment will ascend up forever and ever: and they will have no rest day or night, those who worship the beast and his image, and whoever receives the mark of his name.

Matthew 5:30: If your right hand offends you (if it could cause you to sin and miss Heaven), cut it off, and cast it from you: for it is better for you that one of your members (part of your body) should perish, than for your whole body to be cast into hell.

A person asked what would happen if they were somehow forced to have the chip put in their hand. We pray that does not happen to anyone, but one Heaven Questions Volunteer thought of the above Bible verse, so we felt this would be the place to insert it. Read the entire chapter to fully understand what was being said. 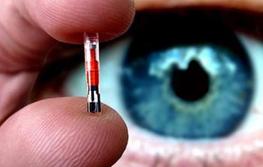 Are MicroChips the Mark of the Beast?

The Food and Drug Administration gave its approval for an implantable microchip to be used for medical purposes.  This paves the way for the Prophecies in the Bible’s Book of Revelation which foretold about a coming mark that would be put into everyone's right hand or forehead. The book of Revelation was written by John the Apostle about 2000 years ago and now the technology has come out in the last few years to make this happen.

This will be the One World Leaders Mark, also called the Antichrist Mark, or the Mark of the Beast, and all those who receive it will be doomed to hell. If they do not receive his mark, they will not be allowed to buy or sell anything.  Then, the World Ruler will begin to put people to death for not receiving his mark, perhaps because they will be labeled a radical or a terrorist.  The Bible warns us that those of our own households will turn against us!  The Bible also talks about a deceiving spirit that will cause unbelievers to harden their hearts against anyone who tries to warn them against receiving the Mark in their right hand or their forehead.

Revelation 16:2: A noisome (ugly) and grievous (painful) sore came upon the people who had the mark of the beast, and on them who worshipped his image.

Interestingly, as reported by one Doctor dealing with the microchips, if the battery bursts or breaks, it will cause a very bad sore on the person. 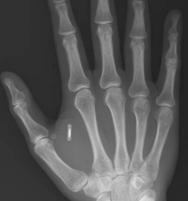 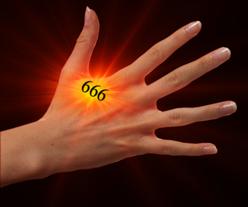