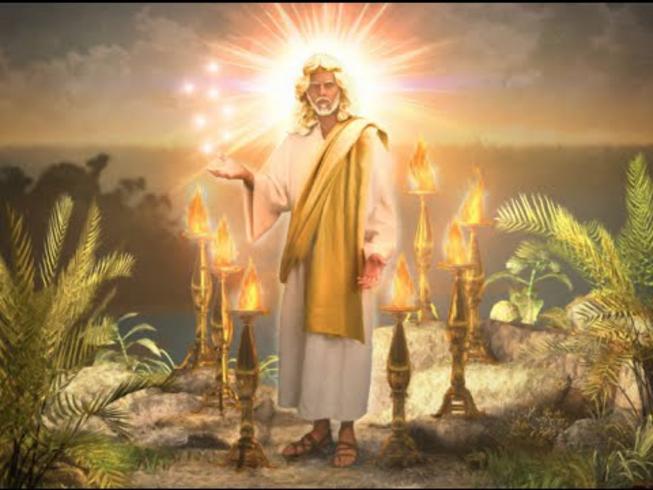 ​The Book of Revelation

2 Who bare record of the Word of God, and of the testimony of Jesus Christ, and of all things that he saw.

The word Angel here means Messenger.  JESUS, the SON OF GOD, was the MESSENGER for GOD the FATHER. This does NOT mean that Jesus is an angelic being. Clearly the Word of God teaches us that Jesus took on the nature of man and not the nature of the angels.

3 Blessed is he [whosoever] that reads, and they that hear [understand] the words of this prophecy, and keep [obey] those things which are written therein: for the time is at hand [near].

Romans 13:11 "It is high time to awake out of sleep [spiritual complacency]: for now is our salvation [final deliverance] nearer than when we [first] believed.

4 John to the  seven Churches [Congregations]which are in Asia: Grace be unto you, and peace, from Him [God the Father] which is, and which was, and which is to come;  and from the seven Spirits which are before His Throne;

The Seven Churches of Revelation, are seven major churches of Early Christianity, as mentioned in the New Testament Book of Revelation. "Churches" in this context refers to the community or local  “Congregations”  of Christians living in each city, and not to the building or buildings in which they gathered for worship.

5 And from Jesus Christ, Who is the faithful witness, and the first begotten of the dead, and the Prince of the Kings of the earth. Unto Him that loved us, and washed us from our sins in His own blood,

6 And has made us kings and priests unto God and His Father; to Him be glory and dominion for ever and ever. Amen.

7 Behold, He [Jesus] Comes with Clouds; and every eye shall see Him, and they also which pierced Him: and all kindreds [tribes of people] of the Earth shall wail [mourn] because of Him. Even so, Amen.

8 I am Alpha and Omega, the Beginning and the Ending, says the Lord, which is, and which was, and which is to come, the Almighty.

VERSE 7  is NOT talking about the “Rapture”, this verse is talking about “The Second Return” of Christ to set up His Kingdom on Earth which occurs at the end of the Tribulation, as shown in the following three verses ...

Revelation 19:11-14 “I saw Heaven opened, and behold a white horse; and He [Jesus] that sat upon him was called Faithful and True ... His eyes were as a flame of fire, and on His head were many Crowns ... His name is called The Word of God. The armies [Saints] which were in Heaven followed Him upon white horses, clothed in fine linen, white and clean."

Matthew 24:30 “They shall see the Son of Man Coming in the Clouds of Heaven.”

9 I John, who also am your brother, and companion in tribulation, and in the kingdom and patience of Jesus Christ, was in the isle that is called Patmos, for the Word of God, and for the testimony of Jesus Christ.

10 I was in the Spirit on the Lord's Day, and heard behind me a great voice, as of a trumpet,

11 Saying, I am Alpha and Omega, the first and the last: and, What you see, write in a book, and send it unto the seven Churches [Congregations] which are in Asia; unto Ephesus, and unto Smyrna, and unto Pergamos [Pergamum], and unto Thyatira, and unto Sardis, and unto Philadelphia, and unto Laodicea.

12 And I turned to see the voice that spoke with me. And being turned, I saw Seven Golden Candlesticks;

13 And in the midst of the Seven Candlesticks one like unto the Son of Man [Jesus], clothed with a garment down to the foot, and girt about the paps [chest] with a golden girdle [sash/belt].

14 His head and His hairs were white like wool, as white as snow; and His eyes were as a flame of fire;

15 And His feet like unto fine brass, as if they burned in a furnace; and His voice as the sound of many waters.

16 And He had in His right hand Seven Stars: and out of His mouth went a sharp two-edged sword [the Word of God]: and His countenance [face] was as the sun shining in his [it’s] strength [the sun’s full brilliance].

Hebrews 4:12 “The Word of God is quick, and powerful, and sharper than any two edged Sword, piercing even to the dividing asunder of soul and spirit, and of the joints and marrow, and is a discerner of the thoughts and intents of the heart.”

17 And when I [John] saw Him, I fell at His feet as dead.  And He [Jesus] laid His right hand upon me, saying unto me, Fear not; I am the first and the last:

18 I am He that lives, and was dead; and, behold, I am alive for evermore, Amen; and I have the keys of hell and of death.

The things seen  = The Vision of Christ - Chapter 1.

The things which are  = The Seven Churches [Congregations] - Chapters 2 and 3.

These portray real Churches during John’s time and also are prophetic outlines of all the Churches [Congregations] throughout church history.

The things which shall be hereafter  = Things which follow after the Church age - Chapters 4 to 22.