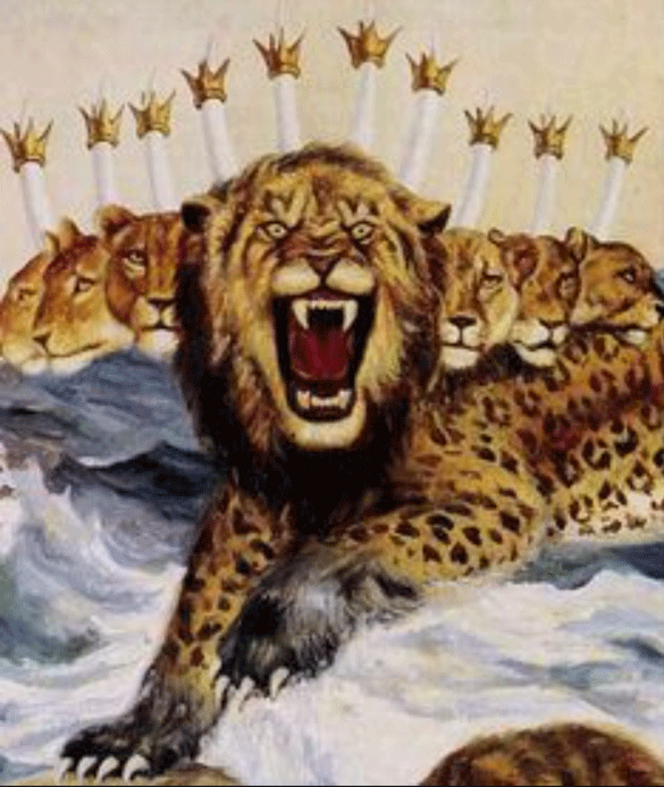 The Number of the Beast 666

The Rise of the Antichrist out of the Sea

1 And I stood upon the sand of the sea [nations of the world], and saw a beast [Antichrist] rise up out of the sea, having seven heads and ten horns, and upon his horns ten crowns, and upon his heads the name of blasphemy. (Notice that the ten horns now have Crowns.)

Revelation 17:12 "The ten horns which you saw are ten kings, which have received no kingdom as yet; but receive power as kings one hour with the beast [the Antichrist]."

Daniel 7:24 "The ten horns out of this kingdom are ten kings that shall arise: and another shall rise after them; and he shall be diverse from the first, and he shall subdue three kings."

2 And the beast [Antichrist] which I saw was like unto a leopard, and his feet were as the feet of a bear, and his mouth as the mouth of a lion: and the dragon [Satan] gave him his power, and his seat, and great authority.

The two verses above are describing and defining the geographical Empire of the Beast. BODY of a Leopard (Grecian Empire) and the 10 Horns (KINGS) that will come OUT OF the former Roman Empire - which were all component fragments of former Empires, FEET of a Bear (Medo-Persian Empire), MOUTH of a Lion (Babylonian Empire).

3 And I saw one of his heads as it were wounded to death; and his deadly wound was healed: and all the world wondered after the beast.

This might mean the apparent death of the Antichrist himself and the healing of the "wound" with his apparent resurrection. “The World wondered after the beast”, reveals that people will be astounded when the Antichrist rises from the dead or simply appears to. His charisma, brilliance, and fascinating but deluding powers will cause the people in the world, who do not believe in God, to follow him unquestioningly.

6 And he [Antichrist] opened his mouth in blasphemy against God, to blaspheme His name, and His tabernacle, and them that dwell in Heaven.

7 And it was given unto him [Antichrist] to make war with the [Tribulation] Saints, and to overcome them: and power was given him over all kindreds [tribes], and tongues, and nations.

See -  (Does The Antichrist Rule the Entire World?)

Daniel 7:25 “He [Antichrist] shall speak great words against the most High [God], and shall wear out the Saints of the most High, and think to change times and laws: and they [Tribulation Saints] shall be given into his hand [Antichrist] until a time and times and the dividing of time [3 ½ Years].”

Daniel 11:32-35 "The people [Saints] that do know their God shall be strong, and do exploits. And they that understand among the people shall instruct many: yet they shall fall by the sword, and by flame, by captivity, and by spoil, many days. Now when they shall fall, they shall be helped with a little help: but many shall cleave to them with flatteries. And some of them of understanding shall fall, to try them, and to purge, and to make them white, even to the time of the end."

8 And all that dwell upon the earth shall worship him [Antichrist], whose names are not written in the Book of Life of the Lamb slain from the foundation of the world.

(The Tribulation Saints do not worship the Antichrist.)

This scripture is for the believers who are alive during the Antichrist's persecution. End time believers are to depend on God and not to take matters into their own hands. Patience, is perseverance and endurance, knowing that in the end, the Antichrist and his followers will be overthrown and judged. God will punish those who are doing evil.

11 And I beheld another beast  [thefalse prophet]  coming up out of the earth; and he had two horns like a lamb, and he spoke as a dragon.

The chief religious figure in the world during the Tribulation years is identified in Scripture as the False Prophet or the second beast. He will be greatly influential in religious affairs, motivated by Satan, having authority delegated to him as he promotes the worship of the Antichrist,  and authenticating his ministry with signs and wonders.

12 And he [the false prophet] exercises all the power of the first beast [theAntichrist] before him, and causes the earth and them which dwell therein to worship the first beast, whose deadly wound was healed.

The false prophet will exercise the same kind of satanic power as the Antichrist because he is empowered by the same source [Satan]. He too, will have worldwide influence and reputation as a miracle worker and speaker.

13 And he [the false prophet] does great wonders, so that he makes fire come down from heaven on the earth in the sight of men,

The two witnesses have just been killed when this image of the Antichrist is set up in the Temple at the half way point of the Tribulation period. Now the Jews will flee from Jerusalem and hide out for the next 3 ½ years.

Revelation 12:6 And the woman fled into the wilderness, where she has a place prepared of God, that they should feed her there a thousand two hundred and threescore days [3 ½ years].

Matthew 24:15-22 “When ye therefore shall see the abomination of desolation, spoken of by Daniel the prophet, stand in the holy place, (whoso readeth, let him understand:) Then let them which be in Judaea flee into the mountains: Let him which is on the housetop not come down to take anything out of his house: Neither let him which is in the field return back to take his clothes. And woe unto them that are with child, and to them that give suck in those days! But pray ye that your flight be not in the winter, neither on the Sabbath day: For then shall be great tribulation, such as was not since the beginning of the world to this time, no, nor ever shall be. And except those days should be shortened, there should no flesh be saved: but for the elect's sake those days shall be shortened.

The Number of the Beast 666

16 And he caused all, both small and great, rich and poor, free and bond, to receive a mark in their right hand, or in their foreheads:

17 And that no man might buy or sell, save he that had the mark, or the name of the beast, or the number of his name.

18 Here is wisdom. Let him that hath understanding count the number of the beast: for it is the number of a man; and his number is Six hundred threescore and six. [666]

The third Angel in  Chapter 14 warns all the people who are still alive on Earth to not worship the beast/antichrist and to not take his “Mark” in their forehead or hand or they will be tormented for eternity. The Mark may be some sort of a “radio-frequency identification” (RFID) Chip.  See -  Quantum Dot "Tattoos" or Microchips may be the "Mark of the Beast".

Third Angel in Chapter 14 Warning People About the Beast

9  And the third Angel followed them, saying with a loud voice, If any man worship the beast and his image, and receive his mark in his forehead, or in his hand, 10 The same shall drink of the wine of the wrath of God, which is poured out without mixture into the cup of His indignation; and he shall be tormented with fire and brimstone in the presence of the holy Angels, and in the presence of the Lamb: 11 And the smoke of their torment ascends up for ever and ever: and they have no rest day nor night, [those] who worship the beast and his image, and whosoever receives the mark of his name.

This third Angel warns all the people who are still alive on Earth to not worship the beast/antichrist and to not take his “Mark” in their forehead or hand or they will be tormented for eternity. As mentioned above, the Mark may be some sort of a “radio-frequency identification” (RFID) Chip.  See -  Quantum Dot "Tattoos" or Microchips may be the "Mark of the Beast".

12 Here is the patience of the saints: here are they that keep the commandments of God, and the faith of Jesus. 13 And I heard a voice from Heaven saying unto me, Write, Blessed are the dead which die in the Lord from henceforth [from this time forward]: Yes, says the Spirit, tat they may rest from their labors; and their works do follow them.

The word “henceforth” shows this refers to those who will die after the False Prophet has issued the command in  Revelation 13:15  that all who will not worship the "Image of the Beast shall be killed." This warning is given to encourage Christians to be faithful until death and for the benefit of those who in that day shall be tempted to compromise with evil in order to preserve their lives for another 3½ years. Millions of Christians and Jews will be killed during the tribulation for their belief in Jesus.

This special class of dead who "DIE IN THE LORD" will be blessed because they will be delivered from the trials and sufferings of the Great Tribulation, and will receive the "MARTYR'S CROWN".

Revelation 2:10 “Be thou faithful unto death, and I will give thee a crown of life.”

What a contrast between the "Blessed Dead," and those who have the "Mark of the Beast." The Christians will rest from their labors, while the unbelievers shall not rest day or night. In fact the moment a Christian dies for not denying Christ, they will immediately be in Heaven.