A New Heaven and New Earth

God shall wipe away all tears

Overcomers shall be God's Children

A New Heaven and New Earth

1 And I [John] saw a new Heaven and a new Earth: for the first Heaven and the first Earth were passed away; and there was no more sea.

2 And I John saw the holy City, New Jerusalem, coming down from God out of Heaven, prepared as a Bride adorned for her Husband. [The New Jerusalem is the Home of the Bride.]

3 And I heard a great voice out of Heaven saying, Behold, the tabernacle of God is with men, and He will dwell with them, and they shall be His people, and God Himself shall be with them, and be their God.

God shall wipe away all tears

4 And God shall wipe away all tears from their eyes; and there shall be no more death, neither sorrow, nor crying, neither shall there be any more pain: for the former things are passed away.

5 And He that sat upon the Throne said, Behold, I make all things new. And He said unto me, Write: for these words are true and faithful.

6 And He said unto me, It is done. I am Alpha and Omega, the beginning and the end. I will give unto him that is athirst of the fountain of the water of life freely.

Overcomes shall be God's Children

7 He that Overcomes shall inherit all things; and I will be his God, and he shall be My son.

8 But the fearful, and unbelieving, and the abominable, and murderers, and whoremongers, and sorcerers, and idolaters, and all liars, shall have their part in the lake which burns with fire and brimstone: which is the second death.

9 And there came unto me one of the seven Angels which had the seven Vials full of the seven last plagues, and talked with me, saying, Come hither, I will show you the Bride, the Lamb's Wife.

10 And he carried me away in the spirit to a great and high mountain, and showed me that great City, the holy Jerusalem, descending out of Heaven from God,

11 Having the glory of God: and her light was like unto a stone most precious, even like a jasper [Diamond] stone, clear as crystal;

New Jerusalem is the home of the Bride [the Saints], who became the Lamb’s Wife, as shown in Revelation 19:7,9 “The marriage of the Lamb is come, and His wife has made herself ready.  Blessed are they which are called unto the Marriage Supper of the Lamb.”

Revelation 21:9-10 The Angel said, "Come hither, I will show you the Bride, 'The Lamb's Wife'," he showed John, instead of a woman, that great City, the "Holy Jerusalem" descending out of Heaven from God.

Here we see that a "City" is called a "Bride" because its inhabitants are the Bride, and not the City itself.

Twelve Gates of Pearl had Names of the Twelve Tribes of Israel
12 And [the City] had a wall great and high, and had twelve gates, and at the gates twelve Angels, and names written thereon, which are the names of the twelve tribes of the children of Israel:

Twelve Foundations had Names of the Twelve Apostles of Jesus

14 And the wall of the City had twelve foundations, and in them the names of the twelve Apostles of the Lamb [Jesus].

15 And he that talked with me had a golden [measuring] reed [rod] to measure the City, and the gates thereof, and the wall thereof.

17 And he measured the wall thereof, an hundred and forty and four cubits [216 feet high], according to the measure of a man, that is, of the Angel.

18 And the building of the wall of it was of jasper[Diamond]:and the City was pure gold, like unto clear glass.

19 And the foundations of the wall of the City were garnished with all manner of precious stones. The first foundation was jasper [Diamond]; the second, sapphire; the third, a chalcedony; the fourth, an emerald;

20 The fifth, sardonyx; the sixth, sardius; the seventh, chrysolyte; the eighth, beryl; the ninth, a topaz; the tenth, a chrysoprasus; the eleventh, a jacinth; the twelfth, an amethyst.

21 And the twelve gates were twelve pearls: every several [single] gate was of one pearl: and the street of the City was pure gold, as it were transparent glass.

22 And I saw no temple therein: for the Lord God Almighty and the Lamb are the temple of it.

23 And the City had no need of the sun, neither of the moon, to shine in it: for the glory of God did lighten it, and the Lamb [Jesus] is the light thereof.

24 And the nations of them which are saved shall walk in the light of it: and the kings of the earth do bring their glory and honor into it.

25 And the gates of it shall not be shut at all by day: for there shall be no night there.

26 And they shall bring the glory and honor of the nations into it.

27 And there shall in no wise enter into it any thing that defiles, neither whatsoever works abomination, or makes a lie: but they which are written in the Lamb's book of life.

River of Water of Life

Throne of God and the Lamb

1 And he showed me a pure River of Water of Life, clear as crystal, proceeding out of the Throne of God and of the Lamb.

2 In the midst of the street of it, and on either side of the river, was there the Tree of Life, which bare twelve manner of fruits, and yielded her fruit every month: and the leaves of the tree were for the healing of the nations.

3 And there shall be no more curse: but the Throne of God and of the Lamb shall be in it; and His servants shall serve Him:

4 And they shall see His face; and His name shall be in their foreheads.

5 And there shall be no night there; and they need no candle, neither light of the sun; for the Lord God gives them light: and they shall reign for ever and ever.

6 And he said unto me, These sayings are faithful and true: and the Lord God of the holy  prophets sent His angel to show unto His servants the things which must shortly be done.

7 Behold, I [Jesus] come quickly: blessed is he that keeps the sayings of the prophecy of this book.

8 And I John saw these things, and heard them. And when I had heard and seen, I fell down to worship before the feet of the Angel which showed me these things.

9 Then said he unto me, See thou do it not: for I am thy fellowservant, and of thy brethren the prophets, and of them which keep the sayings of this book: worship God.

10 And he said unto me, Seal not the sayings of the prophecy of this book: for the time (of their fulfillment) is at hand [is near].

12 And, behold, I [Jesus] come quickly; and my reward is with me, to give every man according as his work shall be.

13 I [Jesus] am Alpha and Omega, the beginning and the end, the first and the last.

14 Blessed are they that do His commandments, that they may have right to the tree of life, and may enter in through the gates into the City.

15 For without are dogs, and sorcerers, and whoremongers, and murderers, and idolaters, and whosoever loves [to lie] and makes a lie.

16 I Jesus have sent My Angel to testify unto you these things in the Churches. I am  the root and the offspring of David, and  the bright and morning star.

Revelation 2:28 "And I will give him [the Overcomers] the Morning Star [which is Jesus]."

Jesus will be given to the Overcomers as their Bridegroom. They will be part of the Bride of Christ.

18 For I testify unto every man that hears the words of the prophecy of this book, If any man shall add unto these things, God shall add unto him the plagues that are written in this book:

20 He which testifies these things says, Surely I come quickly. Amen. Even so, come, Lord Jesus.

21 The grace of our Lord Jesus Christ be with you all. Amen. 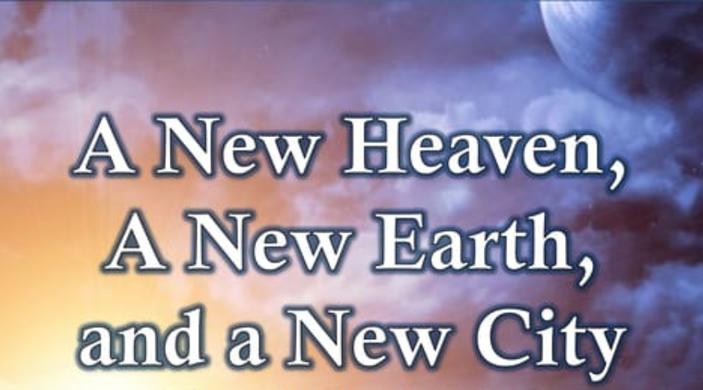