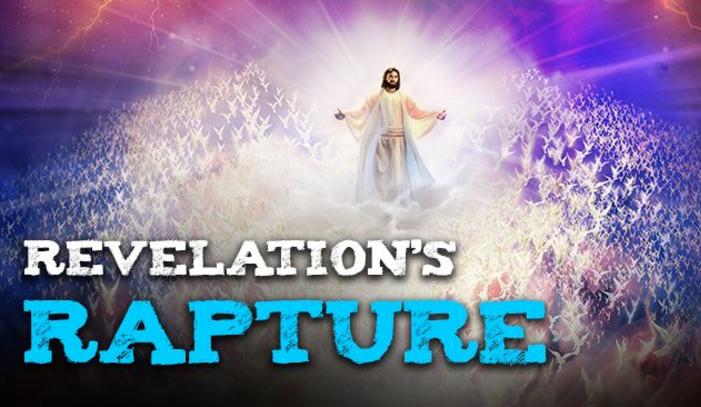 The Rapture
1 After this I looked, and, behold, a door was opened in Heaven: and the first Voice which I heard was as it were of a Trumpet talking with me; which said, Come up here, and I will show you things which must be hereafter. (After the Rapture)

The Rapture is also seen in  Revelation 12:5  "And she brought forth a man child, who was to rule all nations with a  rod of iron: and her child was caught up unto God, and to His throne. "

In  Chapter 4  we see events taking place  in Heaven  after the Rapture.

In  Chapter 12  we see events taking place  on Earth  after the Rapture.

"Jesus Voice" is shown in these verses to be as the sound of a "Trumpet".

Revelation 4:1 "The first Voice I heard was as it were of a Trumpet talking with me."

Revelation 1:10 "I was in the Spirit on the Lord's Day, and heard behind me a great Voice [Jesus], as of a Trumpet."

The Overcomers, are translated before the Great Tribulation in a First-Fruit Rapture, and the final Harvest Gathering and Resurrection will take place afterwards (sometime during the last 3 1/2 years of the Tribulation), and before the Day of God's Wrath.

God Seated On The Throne In Heaven
2 And immediately I [John] was in the spirit: and, behold, a Throne was set in Heaven, and One [God the Father] sat on the Throne.

"God the Father" is sitting on the throne, also seen in Chapter 5:7 when Jesus walks up to the Throne and takes the Book with the seven Seals.

​Revelation 5:7 And He [Jesus] came and took the Book out of the right hand of Him [God] that sat upon the Throne.

3 And He [God] that sat was to look upon like a jasper (sparkling gemstone) and a sardine stone: and there was a rainbow round about the Throne, in sight like unto an emerald (of dazzling colors).

Daniel 7:9 "I beheld ... and the Ancient of days did sit, whose garment was white as snow, and the hair of his head like the pure wool: his throne was like the fiery flame, and his wheels as burning fire."

Twenty-Four Elders Seated Around The Throne Of God
4 And round about the Throne were twenty-four seats [thrones]: and upon the seats I saw twenty-four Elders sitting, clothed in white raiment; and they had on their heads Crowns of gold.

The “twenty-four seats” are actually miniature thrones in authority, subordinate to God, but nevertheless they surround the throne of God.

The Old Testament Saints are represented by the Twelve Tribes of Israel, and the New Testament Saints' by the Twelve Apostles of the Lamb, they together make up the 24 representative characters. This distinction is clearly brought out in the description of the New Jerusalem, where the 12 Foundation Stones are named after the Twelve Apostles of the Lamb, and the 12 Gates after the Twelve Tribes of Israel. (Revelation 21:10-14)

But the fact that the New Testament Saints, as represented by the Twelve Apostles, are required to make up the 24 representative Elders, is additional evidence that the Rapture of the Church takes place before the Tribulation.

The Overcomers Sit on Thrones with Christ

Revelation 3:21 "To him that  overcomes  will I grant to sit with Me in My throne."

The SEATS [Thrones] on which the twenty-four Elders sat indicates they Reign with Christ.

The WHITE RAIMENT symbolize Christ’s Righteousness imputed to believers at Salvation.
The GOLD CROWNS that the Elders wore on their heads provides further evidence that these are Overcomers.

2 Timothy 4:8 “There is laid up for me [Paul] a Crown of Righteousness, which the Lord, the Righteous Judge, shall give me at that day: and not to me only, but unto all them also that love His appearing.”

In Revelation 5:9-10 they sing the “Song of The Redeemed”, and are called Elders, Kings, and Priests, and proclaim that they "shall Reign on the earth".

5 And out of the Throne proceeded lightning and thundering and voices: and there were seven lamps of fire burning before the Throne, which are the Seven Spirits of God.

6 And before the Throne there was a sea of glass like unto crystal [sparkling diamond]: and in the midst of the Throne, and round about the Throne, were four beasts [Seraphims] full of eyes before and behind.

8 And the four beasts [Seraphims] had each of them six wings about him; and they were full of eyes within: and they rest not day and night, saying, Holy, holy, holy, Lord God Almighty, which was, and is, and is to come.

9 And when those beasts [Seraphims] give glory and honor and thanks to Him that sat on the Throne, who lives for ever and ever,

The Elders Cast Their Crowns Before the Throne

10 The twenty-four Elders fall down before Him that sat on the Throne, and worship Him that lives for ever and ever, and cast their Crowns before the Throne, saying,

11 Thou art worthy, O Lord, to receive glory and honor and power: for You have created all things, and for Thy pleasure they are and were created.