The Book of Revelation
Chapter 14
​​The Lamb and the 144,000 Firstfruits, the Bride of Christ

First Angel - Preaching the Gospel to Every Nation

Blessed are Those Who Die Henceforth

Trampling the Winepress - The battle of Armageddon

​​The Lamb and the 144,000 Firstfruits, the Bride of Christ
1 And I looked, and, lo, a Lamb [Jesus-Yeshua] stood on the Mount Zion, and with Him a hundred and forty-four thousand, having His Father's name written in their foreheads.

Hebrews 12:22 “You are come to Mount Zion, and to the city of the living God, the Heavenly Jerusalem.”

The Seal of God is a Spiritual Marking, not a Literal Mark on the foreheads of God's people.  It is applied to the believer with the presence of the indwelling of the Holy Spirit.​

Ephesians 1:13  "After that you believed, you were sealed with that holy Spirit of promise."

Ephesians 4:30 "Grieve not the holy Spirit of God, whereby you are sealed unto the day of redemption."

3 And they sung as it were a new song before the Throne, and before the four beasts [Seraphims], and the Elders: and no man could learn that song but the hundred and forty-four thousand, which were redeemed from the earth.

5 And in their mouth was found no guile: for they are without fault before the Throne of God.

These Christians are chaste [pure] and have not been defiled with women in the sense that they have not committed spiritual adultery. True Christians remain true to God. In Revelation 14:8, 17:2, 18:3  we have this same symbolism. The image of the beast in  Revelation 13:14, 15  is referred to as the “great harlot” in  Revelation 17:1. Those who worshiped the image of the beast were said to be committing fornication with this “great harlot.” To worship anything other than God is to commit spiritual fornication. The 144,000 are the Firstfruit Christians, the Bride of Christ, who remained faithful to God. They also are the ones who follow the Lamb wherever He goes.

These are not Tribulation Christians, for we are told that the Great Tribulation is still on, and people on earth are still receiving the mark of the beast (Rev. 14:9-10). They are, therefore, of the First-Fruit Rapture. They have the name of God written on them, as promised to the Philadelphia church in  Rev. 3:12.  On the other hand, the Tribulation harvest is not seen until  Rev. 14:14-16,  at which time the Son of man comes and reaps the harvest of the earth:

The 144,000 First-Fruits of  Revelation 14  are in Heaven During the Tribulation.

The 144,000 Israelites of Revelation 7 are on Earth During the Tribulation and need protection.

In  Rev. 14  the 144,000 on Mount Zion in Heaven are not the same company as those in  Rev. 7.  The 144,000 of Rev. 7 are only Israelites, while the 144,000 of  Rev. 14  are redeemed from the entire Earth, from among all men. The only similarity between the two companies is their number and that they have the seal of God in their foreheads which probably will be true of all God's people as seen in  Rev. 22:3-4 "There shall be no more curse: but the throne of God and of the Lamb shall be in it... and His name shall be in their foreheads."

Rev. 9:3-4  also shows that the 144,000 Israelites of  Rev. 7  are still on earth during the Great and Terrible Day of the Lord, and that they are sealed for their protection. "Revelation 9:3-4 There came out of the smoke (from the bottomless pit) locusts upon the earth: and unto them was given power, as the scorpions of the earth have power. 4 And it was commanded them that they should not hurt the grass of the earth, neither any green thing, neither any tree; but [hurt] only those men which do not have the Seal of God in their foreheads.​"

Earthly Zion could not contain 144,000 people. The 144,000 Israelites on earth live near, not on, the earthly Zion which, at the most, could hold only a few thousand people. We can safely assume that there is plenty of room for 144,000 saints on the Heavenly Mount Zion as well as an "immeasurable company of angels."

First Angel - Preaching the Gospel to Every Nation

6 And I saw another Angel fly in the midst of heaven [the sky], having the everlasting gospel to preach unto them that dwell on the earth, and to every nation, and kindred, and tongue, and people,

7 Saying with a loud voice, Fear God, and give glory to Him; for the hour of His judgment is come: and worship Him that made Heaven, and Earth, and the sea, and the fountains of waters.

There will come a time when an angel will actually appear and preach the gospel from heaven to all men of all nations. This Angel is flying around Earth preaching the Gospel, giving everyone an opportunity to accept Jesus Christ as their Savior. God is giving all mankind every chance to make Heaven their home, by even sending Angels flying in the sky to give everyone warnings.

8 And there followed another [Second] Angel, saying, Babylon is fallen, is fallen, that great city, because she made all nations drink of the wine of the wrath of her fornication.

9 And the third Angel followed them, saying with a loud voice, If any man worship the beast and his image, and receive his mark in his forehead, or in his hand,

11 And the smoke of their torment ascends up for ever and ever: and they have no rest day nor night, [those] who worship the beast and his image, and whosoever receives the mark of his name.

This third Angel is warning all the people who are still alive on Earth to not worship the beast/antichrist and to not take his “Mark” in their forehead or hand or they will be tormented for eternity. The Mark may be some sort of a “radio-frequency identification” (RFID) Chip.  See -Quantum Dot "Tattoos" or Microchips may be the "Mark of the Beast".

Blessed are Those Who Die Henceforth

12 Here is the patience of the saints: here are they that keep the commandments of God, and the faith of Jesus.

13 And I heard a voice from Heaven saying unto me, Write, Blessed are the dead which die in the Lord from henceforth [from this time forward]: Yes, says the Spirit, that they may rest from their labors; and their works do follow them.

The word “henceforth” shows this refers to those who will die after the False Prophet has issued the command in  Revelation 13:15  that all who will not worship the "Image of the Beast shall be killed." This warning is given to encourage Christians to be faithful until death and for the benefit of those who in that day shall be tempted to compromise with evil in order to preserve their lives for another 3½ years. Millions of Christians and Jews will be killed during the tribulation for their belief in Jesus.

This special class of dead who "DIE IN THE LORD" will be blessed because they will be delivered from the trials and sufferings of the Great Tribulation, and will receive the "MARTYR'S CROWN".

Revelation 2:10 “Be thou faithful unto death, and I will give thee a crown of life.”

What a contrast between the "Blessed Dead," and those who have the "Mark of the Beast." The Christians will rest from their labors, while the unbelievers shall not rest day or night. In fact the moment a Christian dies for not denying Christ, they will immediately be in Heaven.

Harvesting the Earth - Living Tribulation Saints Gathered by Angels
14 And I looked, and behold a white cloud, and upon the cloud one sat like unto the Son of Man [Jesus], having on His head a Golden Crown, and in His hand a sharp sickle.

15 And another Angel came out of the temple, crying with a loud voice to Him [Jesus] that sat on the cloud, Thrust in Your sickle, and reap: for the time is come for You to reap; for the harvest of the Earth is ripe.

16 And He [Jesus] that sat on the cloud thrust in His sickle on the Earth; and the Earth was reaped.

At this time, Angels gather and bring the Tribulation Saints that are still alive on Earth to the Throne Room in Heaven before the “Day of God’s Wrath”. These people and the 144,000 Israelites, will inhabit the Earth in their human bodies during the Millennium [the 1000 year Reign of Christ]. This gathering of the saints is shown in the following verses.

Revelation 15:2-4 “And I saw as it were a sea of glass mingled with fire: and them that had gotten the victory over the beast, and over his image, and over his mark, and over the number of his name, stand on the sea of glass, having the harps of God. 3 And they sing the song of Moses [Exodus 15] the servant of God, and the song of the Lamb, saying, Great and marvelous are thy works, Lord God Almighty; just and true are thy ways, thou King of saints. 4 Who shall not fear thee, O Lord, and glorify thy name? for thou only art holy: for all nations shall come and worship before thee; for thy judgments are made manifest.”

Matthew 24:31 “He shall send His angels with a great sound of a trumpet, and they shall gather together His elect.”

Mark 13:27 “And then shall He send His angels, and shall gather together His elect.”

The Angels are sent to gather these people because they are still in their earthly bodies. The Saints who were caught up in the Rapture did not need to be gathered by the Angels, since their bodies were changed, "in the twinkling of an eye", and they ascended to meet the Lord in the air.

All believers in Christ who are still alive during this time period of the Tribulation are gathered immediately before God pours out His wrath upon the Earth.  These believers, along with the believing Israelites who were sealed, will populate the millennial kingdom during the thousand year reign of Christ.

There will be two distinct groups occupying the Earth during the millennial kingdom, those with glorified bodies, and those with earthly bodies.

Trampling the Winepress - The battle of Armageddon

17 And another angel came out of the temple which is in Heaven, he also having a sharp sickle.

18 And another angel came out from the altar, which had power over fire; and cried with a loud cry to him that had the sharp sickle, saying, Thrust in thy sharp sickle, and gather the clusters of the vine of the earth; for her grapes are fully ripe.

19 And the angel thrust in his sickle into the earth, and gathered the vine of the earth, and cast it into the great winepress of the wrath of God. [The battle of Armageddon]

20 And the winepress was trodden without the city, and blood came out of the winepress, even unto the horse bridles, by the space of a thousand and six hundred furlongs. [160 Miles]

Revelation 19:14-15 "And the armies [Saints] which were in Heaven followed Him [Jesus] upon white horses, clothed in fine linen, white and clean. And out of His mouth goes a sharp sword [the Word of God], that with it He should smite the nations: and He shall rule them with a rod of iron: and He treads the winepress [The battle of Armageddon] of the fierceness and wrath of Almighty God." 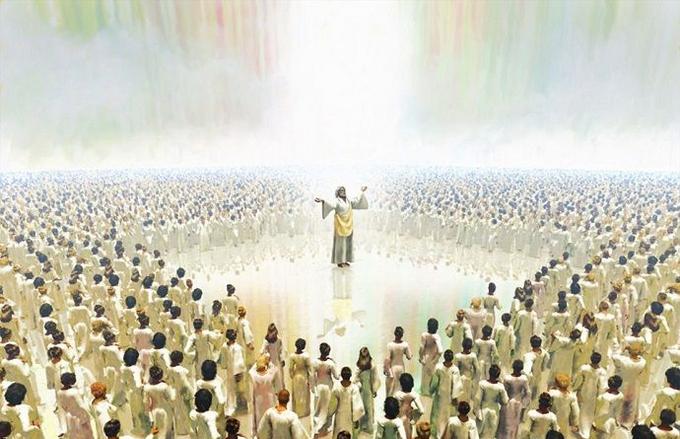