Jesus takes the Book from God the Father

The Scroll with Seven Seals - The Title-Deed of the Earth
1 And I [John] saw in the right hand of Him [God] that sat on the Throne a Book written within and on the backside, sealed with seven Seals.

In the beginning when man was made in the image of God, the inheritance of the Earth and of immortal life were given to Adam and Eve. However when Adam sinned, he lost his inheritance of the earth, and it passed out of his hands into the possession of Satan, to the disinheritance of all of Adam's seed.

The forfeited Title-Deed of the Earth is now in God's hands and is awaiting redemption. Its redemption means the legal repossession of all that Adam lost by the Fall. The time has come for the whole Earth to be restored to its rightful heirs. The price of the redemption was paid by Christ 2000 years ago, even though it would not come into the hands of the heirs at that time. So even though the price has been paid, the land redeemed, and the time has come to take possession, the evidence has to be presented and the seals broken in the presence of the heirs. The heirs are now present, having been Raptured or Resurrected, and they sing the song of redemption, anticipating the imminent redemption of the Earth.

2  And I saw a strong Angel proclaiming with a loud voice, Who is worthy to open the Book, and to loose the Seals thereof?

3 And no man in Heaven, nor in earth, neither under the earth, was able to open the Book, neither to look thereon.

4 And I wept much, because no man was found worthy to open and to read the Book, neither to look thereon.

5 And one of the Elders said unto me, Weep not: behold, the Lion of the tribe of Judah, the Root of David, [Jesus] has prevailed to open the Book, and to loose the seven Seals thereof.

6 And I beheld, and, lo, in the midst [center in front] of the Throne [where God sat] and of the four beasts [Seraphims], and in the midst of the Elders, stood a Lamb as it had been slain, having seven horns and seven eyes, which are the seven Spirits of God sent forth into all the earth.

Jesus takes the Book from God the Father
7 And He [Jesus] came and took the Book out of the right hand of Him [God] that sat upon the Throne.

The position of the Lamb [Jesus] is described from John’s point of view: The Lamb is not on the Throne, but standing in the center in front of it, and also apparently between the living creatures, and in the midst of the circle formed by the Elders.

Christ the Mediator takes and opens the Book. This revelation describes the person of Christ, the Mediator between God and men, as the Eternal Word of God, and our Redeemer: as the Lamb of God, standing as slain and making intercession for us by the power and merit of His everlasting sacrifice, armed with the Spirit of God.

8 And when He [Jesus] had taken the Book, the four beasts [Seraphims] and twenty-four Elders [the Bride] fell down before the Lamb, having every one of them harps, and golden vials full of odors, which are the prayers of saints.

When the Lamb stepped forward to open the Book, the Seraphims and the twenty-four elders fell down before Him. Harps and golden vials full of odors - the prayers of the saints - filled the atmosphere with beautiful music and sweet fragrances; the music of worship and the fragrance of prayer. This is the most impressive evidence of the importance of prayer. Prayer should be an essential part of our lives. Each prayer is carefully preserved in Heaven, and in that day they will fill the celestial atmosphere with their fragrance.

9 And they [the Bride] sung a new song, saying, Thou art worthy to take the Book, and to open the Seals thereof: for You [Jesus] were slain, and have redeemed us to God by Thy blood out of every kindred [tribe], and tongue, and people, and nation;

10 And have made us unto our God kings and priests: and we shall reign on the earth.

Once again, the Elders are shown to represent the Bride of Christ. In Revelation 4:4, they were Seated, had on White Raiment, and wore Crowns. In this chapter they are singing the “Song of The Redeemed”, and are called Kings, and Priests, and are proclaiming "We shall Reign on the Earth".

11And I beheld, and I heard the voice of many Angels round about the Throne and the beasts [Seraphims] and the Elders: and the number of them [the Angels] was ten thousand times ten thousand, and thousands of thousands;

The Firstfruit Raptured and Resurrected Saints of God along with a hundred million angels and every living creature all join in with praise and adoration.

12  Saying with a loud voice, Worthy is the Lamb that was slain to receive power, and riches, and wisdom, and strength, and honor, and glory, and blessing.

13 And every creature which is in Heaven, and on the earth, and under the earth, and such as are in the sea, and all that are in them, I heard saying, Blessing, and honor, and glory, and power, be unto Him [God] that sits upon the Throne, and unto the Lamb [Jesus] for ever and ever.

John heard every creature in Heaven and on earth praising God and His Son. The crescendo to this symphony of praise is all creation, everywhere and everything worships the Father and the Son.

The birds, the animals, and the fish finally cry out, all creation had been groaning under the futility of the curse, now they know that they are about to be set free. Clearly animals had greater capabilities for communication with men before “The Fall”.

In "Genesis 3:1-5" the serpent spoke to Eve and she obviously was not surprised to hear him speaking.

"Revelation 22:3" shows that Christ’s Redemption will reverse all the effects of the curse. “There shall be no more curse.”

14 And the four beasts [Seraphims] said, Amen [so be it]. And the twenty-four Elders fell down and worshipped Him that lives for ever and ever. 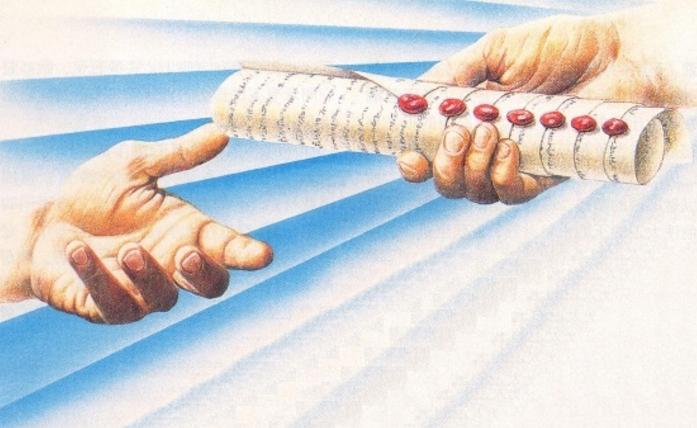